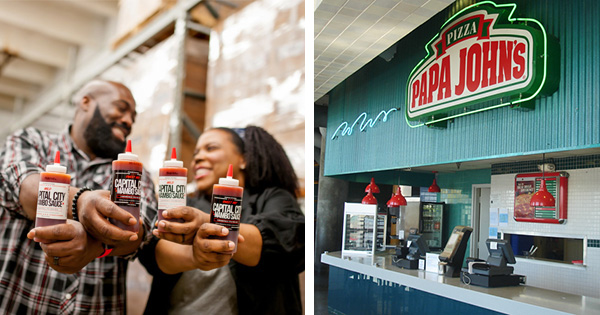 Capital City, a Black-owned company based in Washington, D.C., was chosen by Papa John’s to be their partner in serving up wings covered in their signature mambo sauce. Wings and poppers with Capital City’s mambo sauce are now available in most Papa John’s locations in the Washington DC area.

Capital City made the announcement of the partnership with Papa John’s on their website. It read, “We care about what our customers and community thinks. Without YOU, there would be no Capital City. This was a hard decision to make considering Papa John’s history.”

The famous pizza chain’s move to partner with the Black-owned company came about a year after they have been involved in a racial discrimination incident. Its founder, John Schnatter, eventually resigned as chairman after admitting he used the N-word during a conference call.

Capital City’s owner Arsha Jones and her husband, Charles, said they were initially nervous and excited when the company approached them due to the incident with Schnatter. But they decided to push through with the partnership after a number of meetings and conversations and they saw that Papa John’s is comprised of “a lot of really great people.”

“We were given a once in a lifetime opportunity to partner with a national brand and we’re committed to making this relationship successful and using our position to help support our community,” they said.

In addition to offering wings smothered in mambo sauce, Capital City Mambo Sauce wings, poppers, dipping sauce, and bottles will also be sold at all the participating locations.

Jones said she hopes the partnership is just a start to more national opportunities for their local business.

“We’re able to boost our visibility to a larger audience,” she told NBC4 News. “Our decision to partner with Papa John’s positions us for growth across the region.”

For more information on Capital City and/or to order online, visit www.shopcapitalcity.com